Also that in this 27 degree Celsius heat, the drive back had the engine temperature needle rock solid. That for a slant-4 Sprint is something very good and almost remarkable.

In other news, that £8k green Sprint that looked in immaculate condition appears to have a few issues too:
https://forum.triumphdolomite.co.uk/vie ... 6&p=324286

Admittedly not as many as mine, but then £8k is still a lot to spend on a car that has wayward steering. Even if it's apparently not badly priced based on condition, going on current market values.
Top

Video﻿ of me jabbering﻿ on a bit giving an overview of it. Involves poking ﻿rusty lumps﻿﻿﻿ and engine starting.

Took the wheel off ready to swap on the alloy that I removed the insert on. While I was there I thought I'd go for a rusty tour and have a proper poke around underneath.

First off the shock. Someone has spent some money on this at some point! Spax shocks. The bushes seem to be a mix of polybush and rubber. Actually mostly seem in good nick. Only ones that may need attention is the antiroll bar bushes. 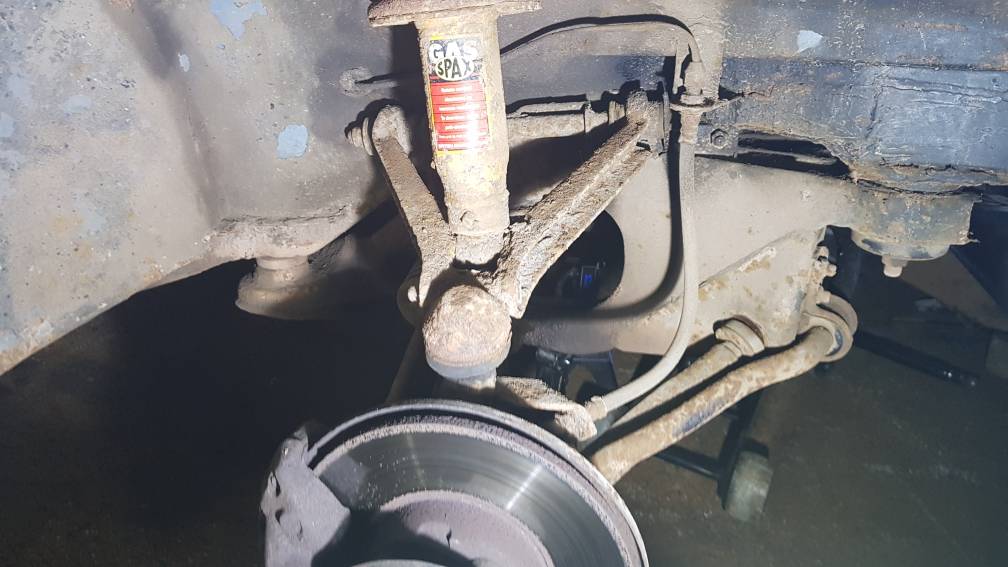 Brake discs are all pitted. 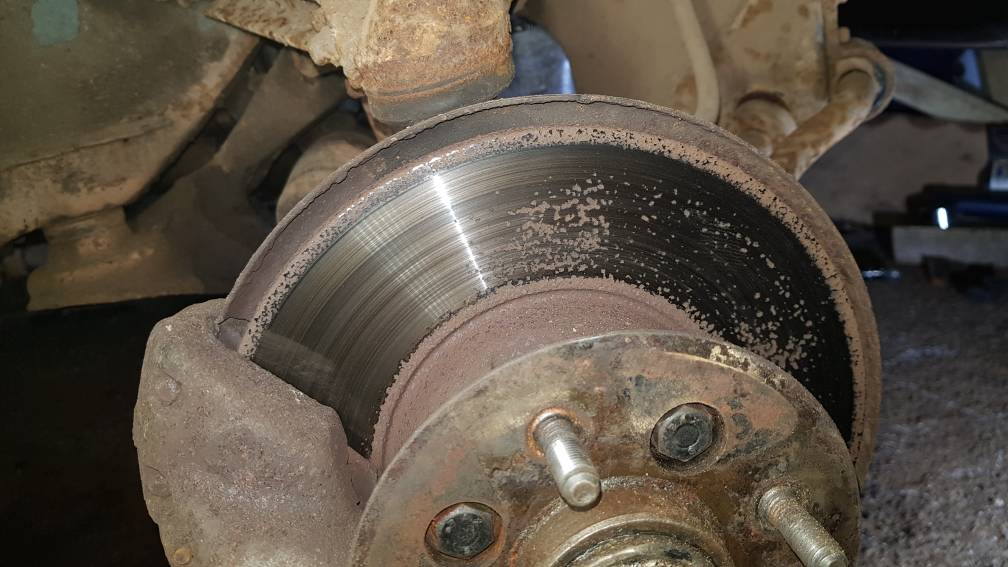 Brake fluid is also quite dark. I think I'm going to need new discs, pads, caliper rebuild and a master cylinder as a start. Maybe some stuff on the back too, depending how it looks. Flexis look reasonably recent though.

Front light area will need some attention at some point. I think this has degraded simply from dirt. 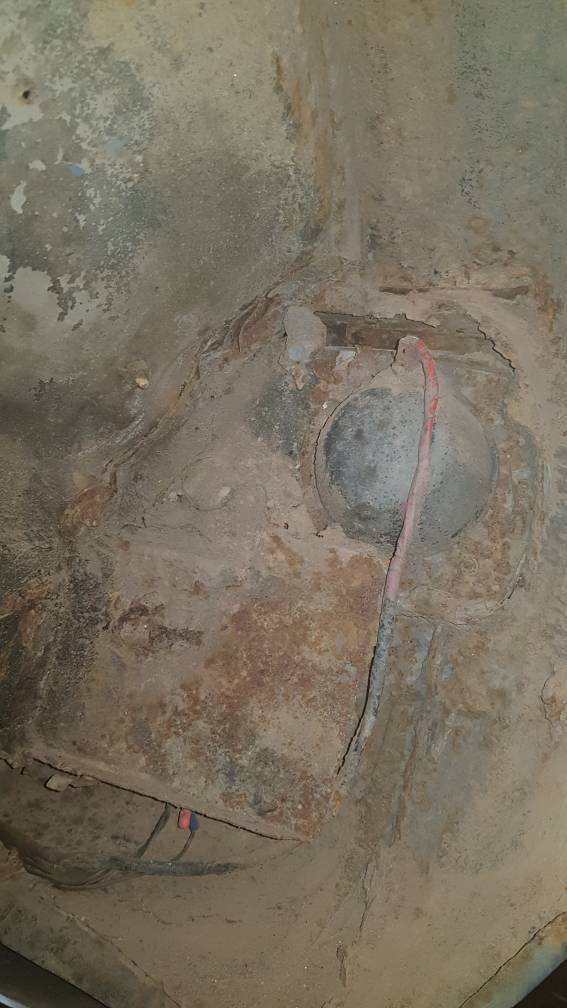 Drivers floor we know about already 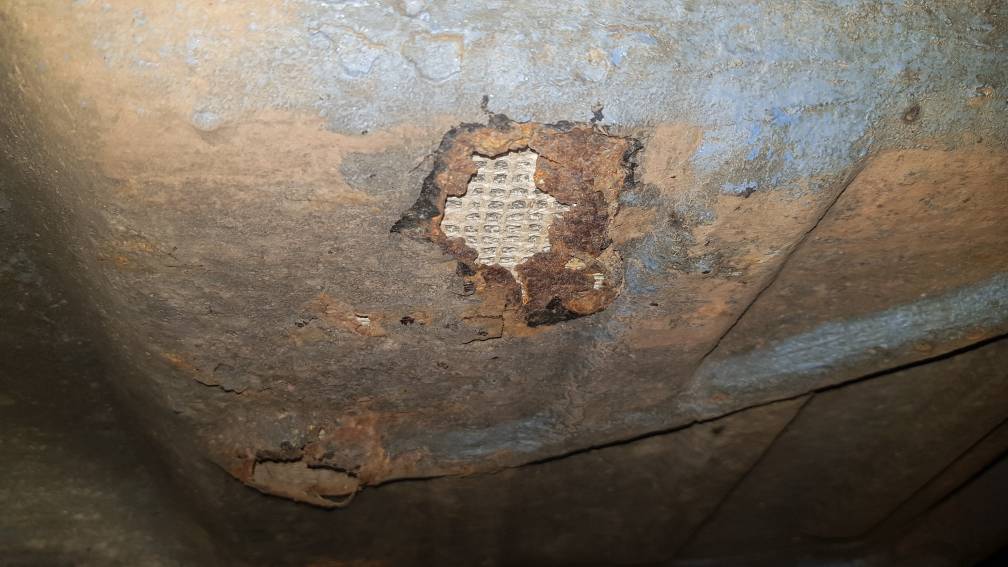 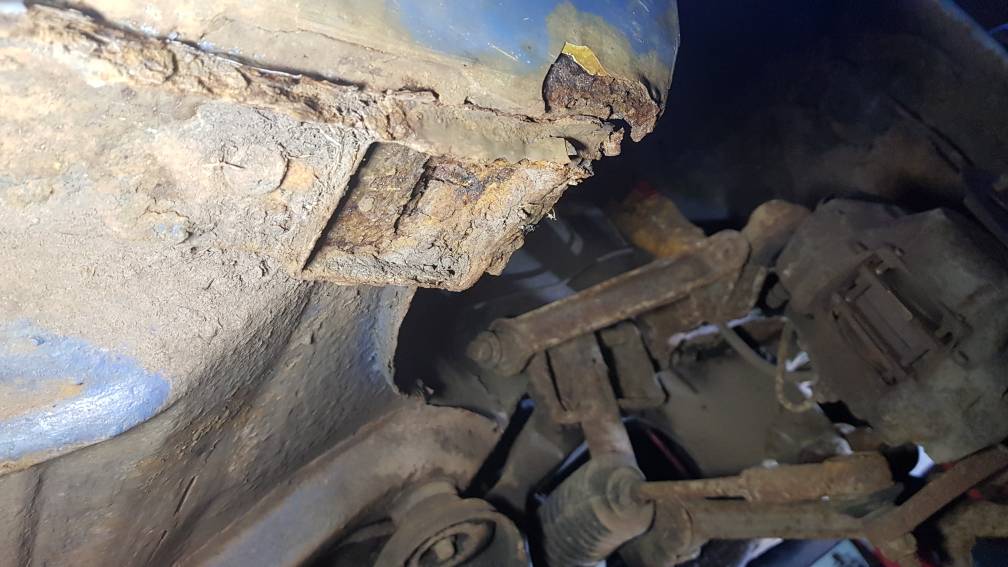 So I stuck my finger in it. 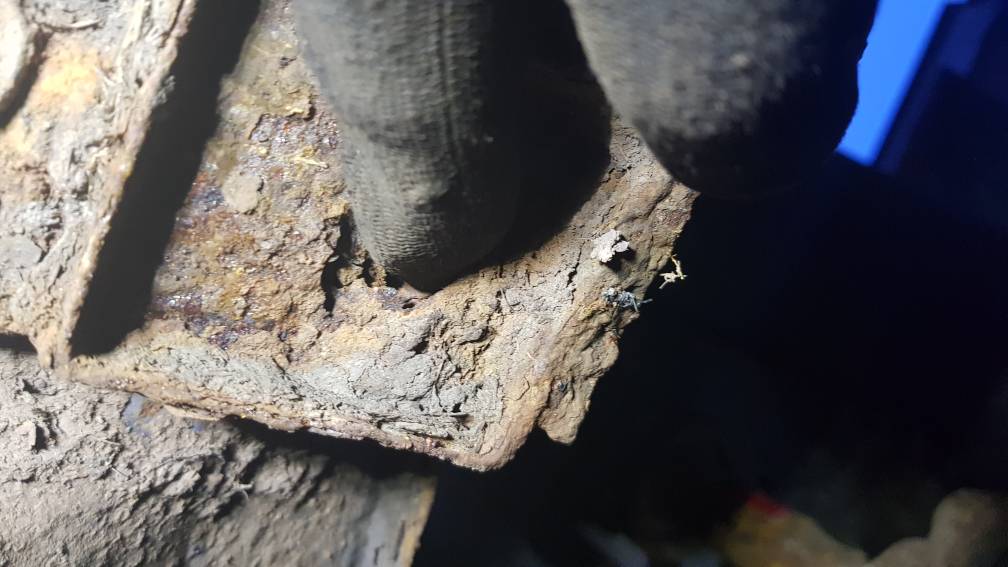 And was left with a hole 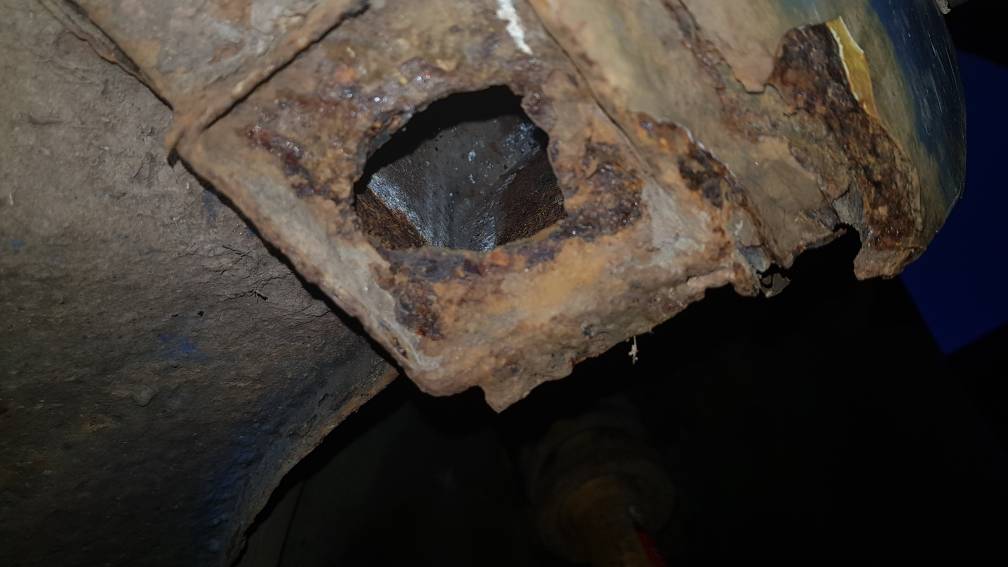 Looks easy enough to weld up. Might actually do it sooner rather than later. 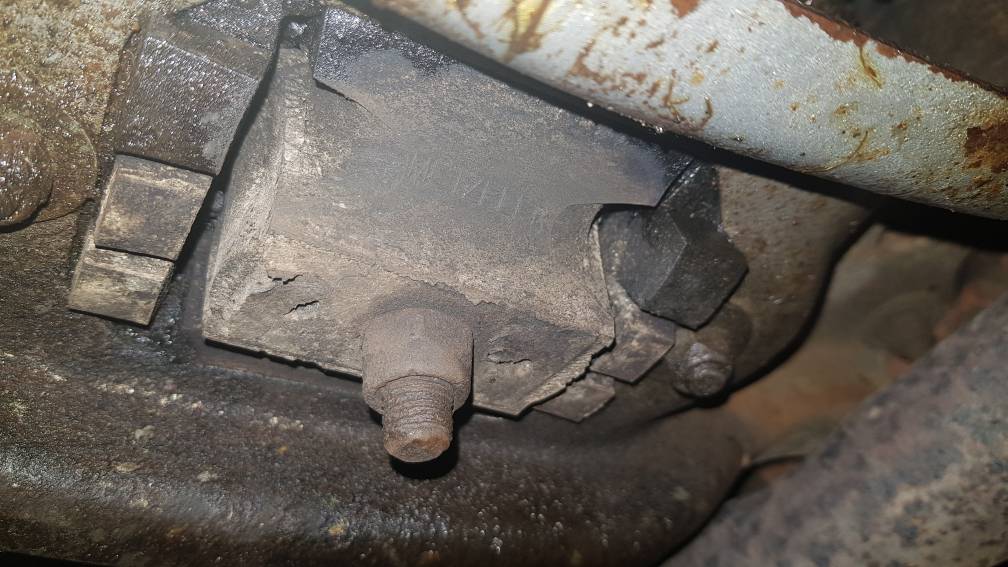 Engine mounts you can tell have been replaced but the rubber is splitting already. 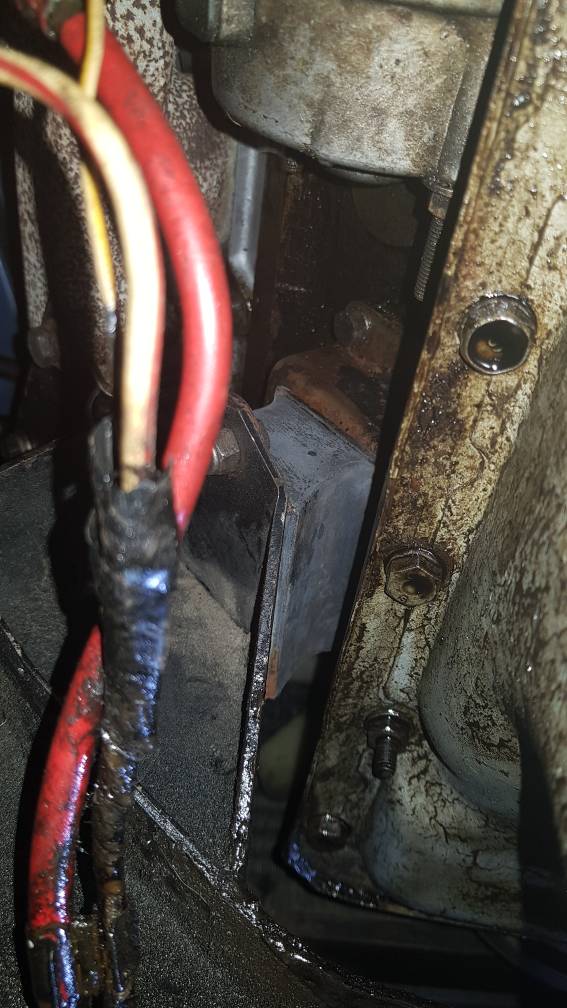 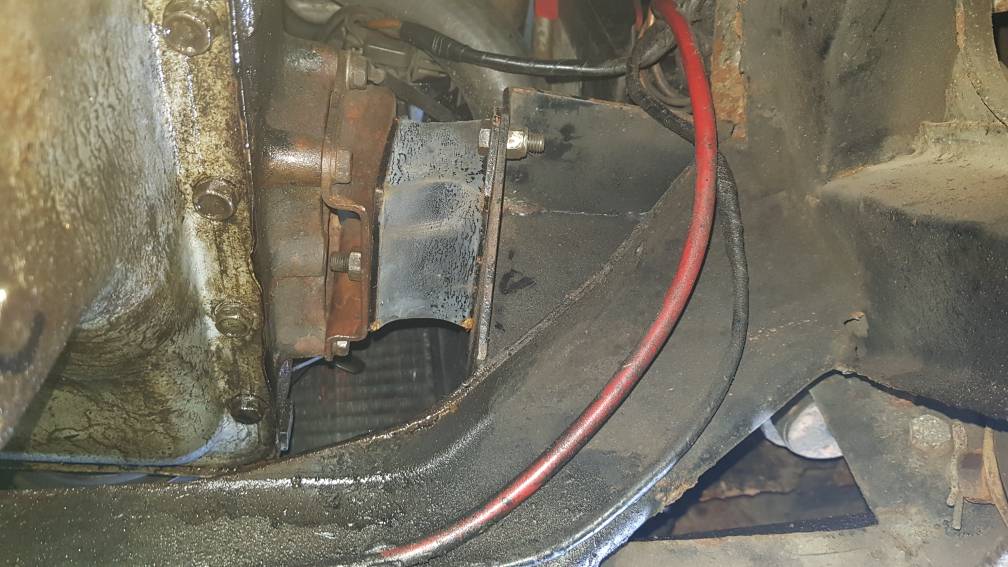 Further towards the back of the body looks in decent nick. Undersealed but not like it has been chipped off. 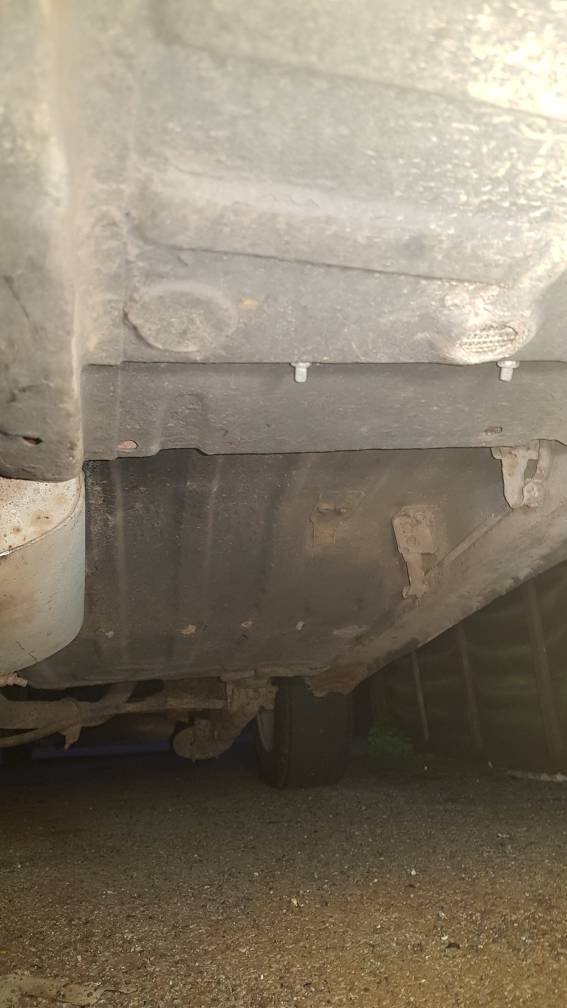 Clutch slave looks a bit suspect around that seal. Wondering if it's leaking or weeping slightly and causing the pedal and selection issues. 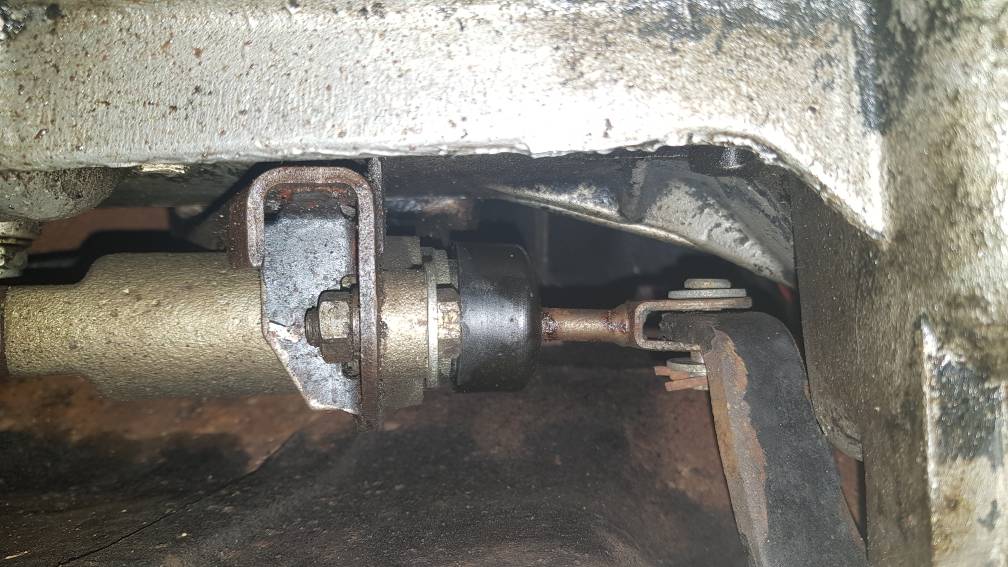 Friggin oil everywhere though. Made it quite unpleasant to be at the engine end. 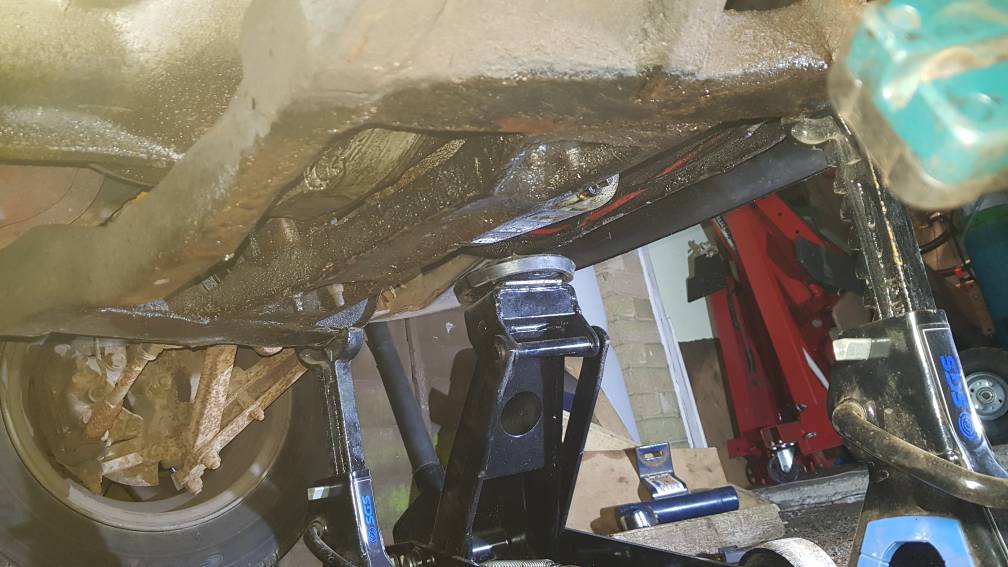 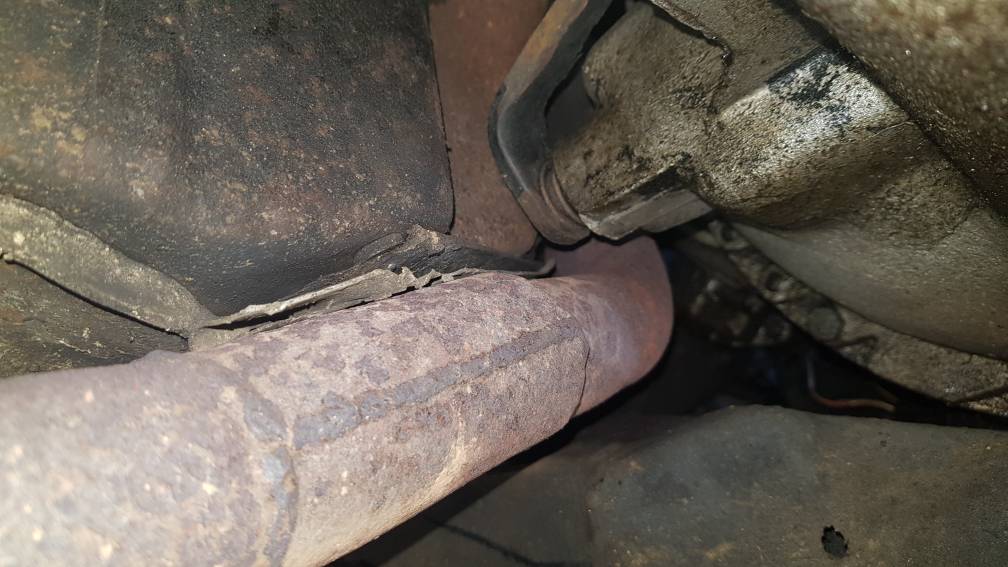 Could that bit of metal on top be causing all the noise issues? Maybe...?

Tried ripping it off but it's attached to a backing piece. I was going to continue pulling but then I had a fear that backing piece may be full of asbestos. I'll probably pull the tunnel out and try removing it that way. 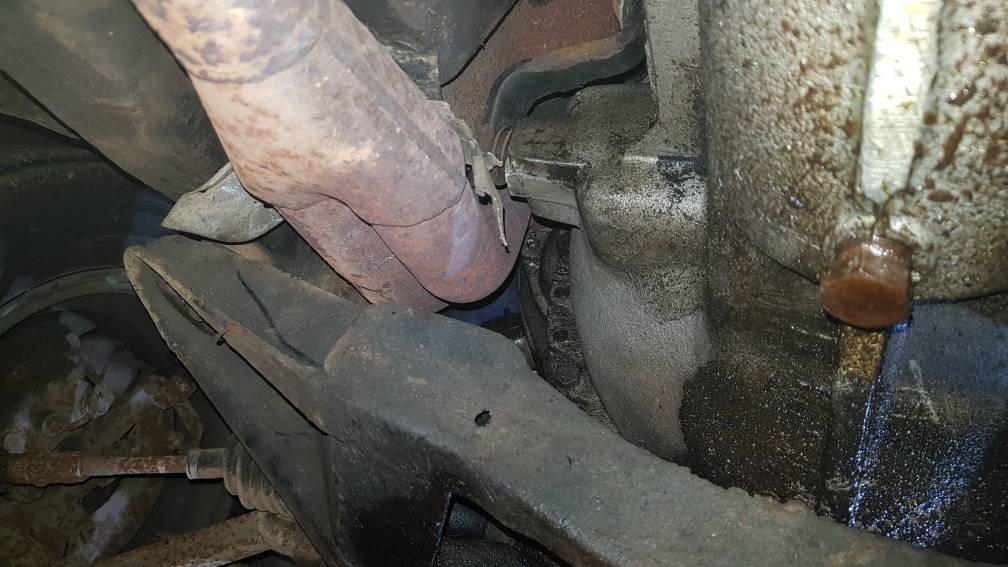 What should I replace it with? I guess I ought to, otherwise it's going to get really rather hot on the other side of the floor.

Went to do an oil change but was stumped by the sump plug. I don't have any tool to remove this and mole grips/adjustable wrench/etc was just rounding it off. Anyone have any idea of a tool model number or similar to get this out? 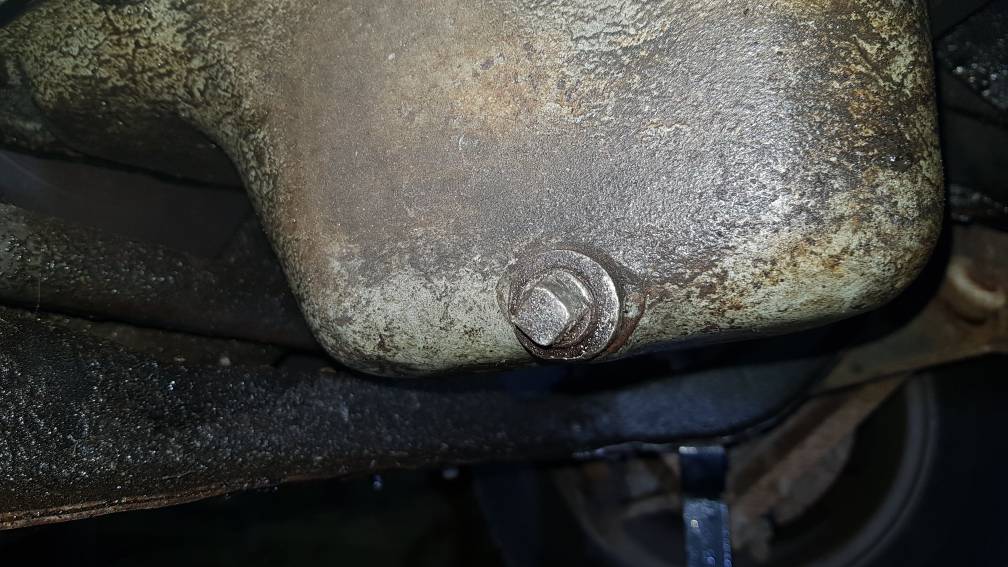 Worse case I can always use my Pela to suck out the oil. However I'd prefer to drop the oil out the bottom. Not least the Pela struggles with 20w-50.


Had a nose around the engine bay for anything suspect.

Wiring for the ignition was a bit messy. I insulated taped up the exposed spades and some of the crimps weren't holding the wire properly. Recrimped a few of the connectors. Especially useful thing to do, as a wire coming out on the ignition parts can give you a very bad day. 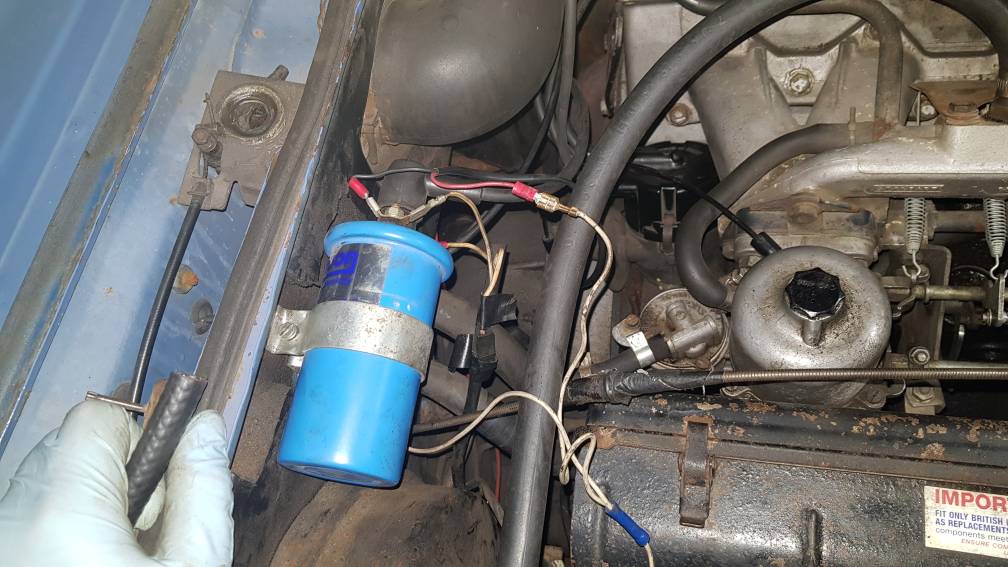 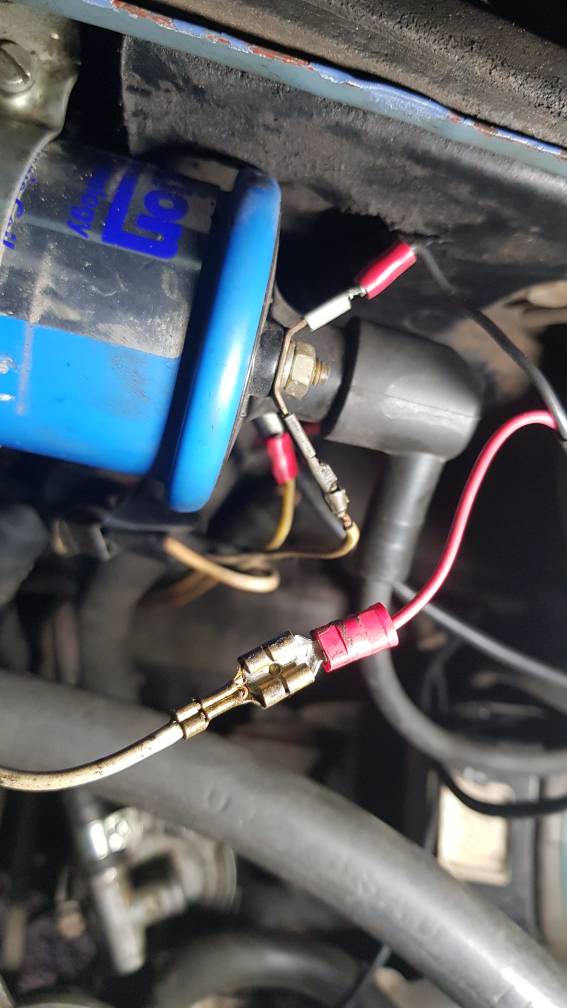 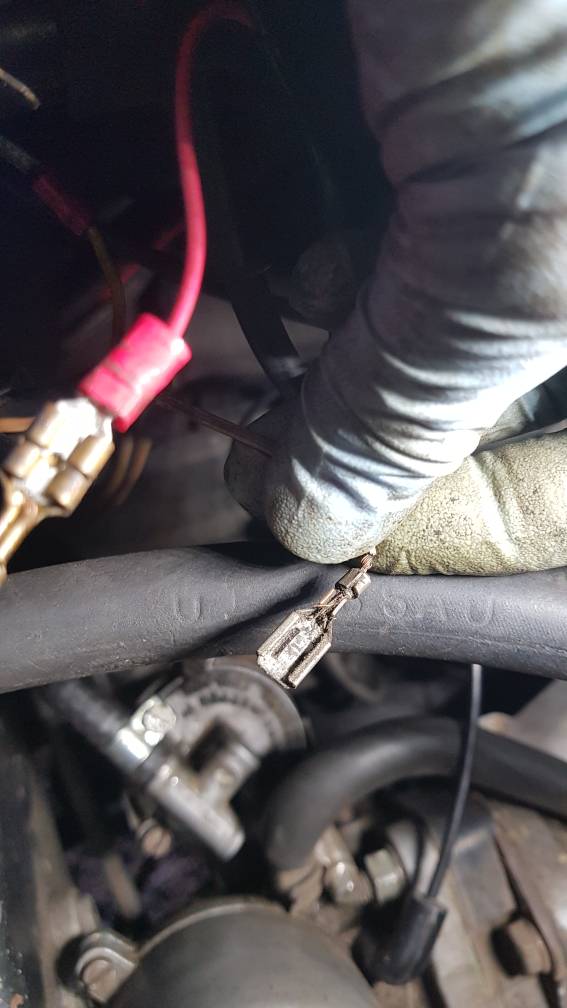 Noticed this accident waiting to happen. 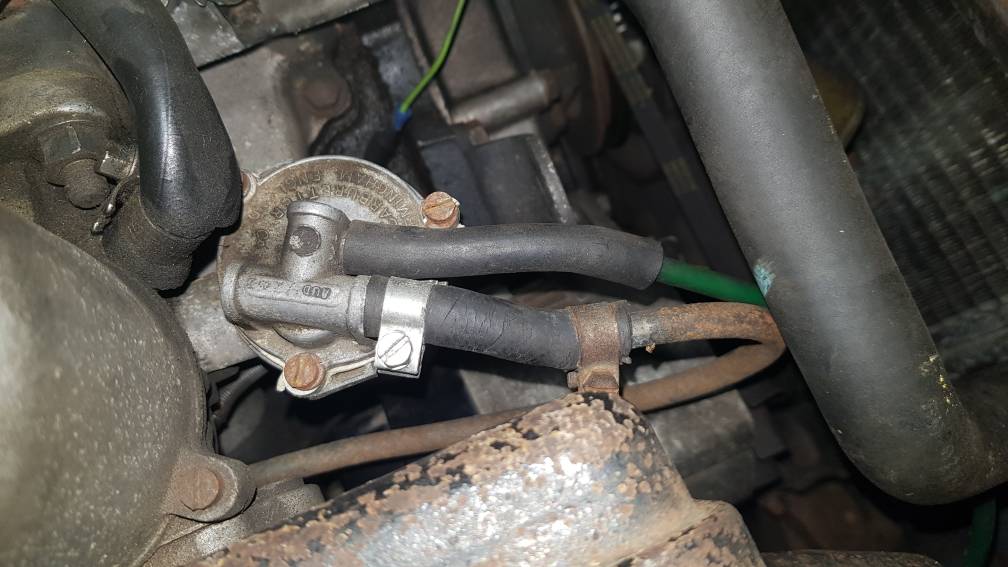 Replaced those cracked petrol joining hoses with some genuine Gates petrol hose that is Ethanol compliant. I need to get some more but I'll replace all the other petrol hoses with it too. Other petrol hoses were a lot more modern but it's not clear if they are ethanol compliant. No point risking on this sort of stuff. Get it wrong and you'll have petrol leak all in the engine bay. A lot of fake Gates hose around too. It costs a bit more, but I get mine from Moss Motors as you get some certainty it's genuine and legit. 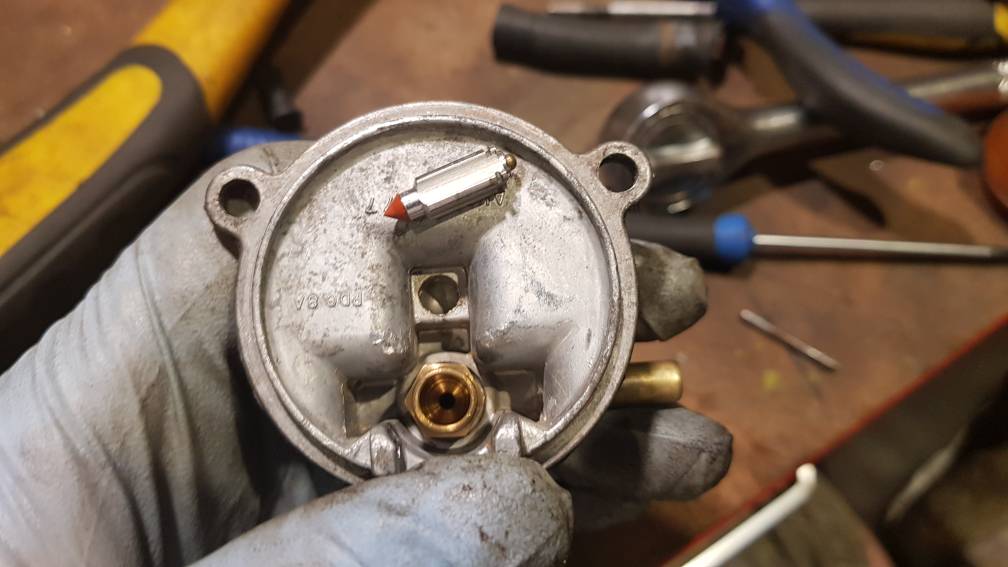 Underneath the car I could see that someone has taken the waxstat jets out and replaced them with standard ones. Again, I think someone has spent a lot of money on this car in the not so distant past.

One final thing I noticed when putting the wheels on, is that the front wheel bearings have quite a bit of play in them. Either that, or they need tightening up a tad. This possibly is what was giving the wayward steering when I drove it back? There are some Daewoo branded bearings in the boot full of spares, in a Jiffy bag labeled front wheel bearings. I'll have a look tomorrow and see if they were old ones which had been replaced or if they were bought for the intention of getting them on but never did.
Top

This is all rather splendid. Canley Class.
Top

Looks quite solid from all that.
Self-appointed Internet God
Top

I still have the tool I made myself in my Trummy days. 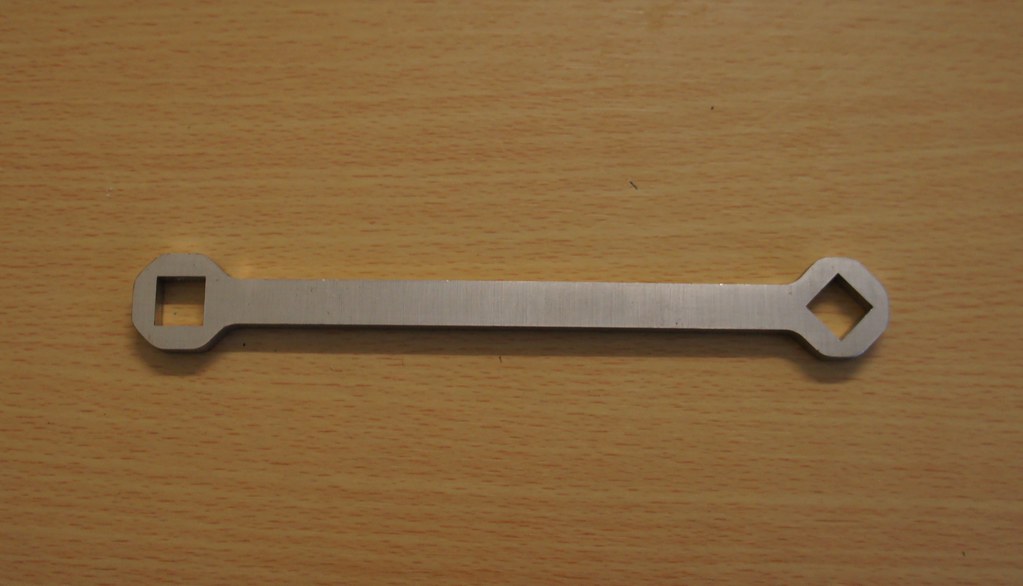 It's yours if you want it.
Heil mein de Pfeffel!
Top

It's yours if you want it.

That would be most excellent!
Top

To anyone who fiddles with old German stuff, the BL way of design and build is a cross between archaic and comedy.

The Reverend Bluejeans wrote: ↑
Sat Jul 27, 2019 8:43 pm
To anyone who fiddles with old German stuff, the BL way of design and build is a cross between archaic and comedy.

I dunno man. These things can go from cool to really hot to HGF in seconds if the coolant level should drop even a bit below that pump.

Yeah I believe so. The colour is one of the things that made me want it (apart from it being really cheap). I also love the Inca Yellow and Pimento Red. But then it always seems a lot of them floating about. There is a deeper blue too that is nice.

Colour the nod of approval from the missus too. Unlike the colour on the BGT which she really doesn't like.
Top

The Reverend Bluejeans wrote: ↑
Sat Jul 27, 2019 8:43 pm
To anyone who fiddles with old German stuff, the BL way of design and build is a cross between archaic and comedy.

Anyone who fiddles with old German stuff will realise that British engineering was the root of every fucking thing.
The main difference between the Germans and the English, which are the fucking same people no matter how you look at it, is that the Germans moved on and the British didn't. Island syndrome. Also see 'Hooli'.
Heil mein de Pfeffel!
Top
Post Reply
474 posts