It and the Minor have always had a bit of a fluff after a couple of weeks inactivity but this was so prolonged I felt something was badly wrong. Especially after all my poking around in recent weeks.....Oh well, fixed for now.
I blame China. Chi-Na.
Top

xtriple wrote: ↑
Thu May 14, 2020 11:28 am
I had a series three 4.2 XJ many years ago that used to do the belching smoke and running like a pig when cold. I once got serious abuse from a cyclist as HE PASSED me! I went to the local scrappies and knicked all the various sensors I could find from one in the yard and replaced everything, one of them did the trick

It was most embarrassing until I fixed it.

I once had a series 3 4.2 that refused to start one cold autumn morning. really late one, a D reg. Tried all sorts to get it going but no luck. Tried again a few times over the winter but no joy. Left it til a nice warm spring day. Started up no problem. Sold it soon after.
Top

Coolant topped up early this evening and then did the bleeding procedure according to the Porsche workshop manual. Basically pull up special bleed valve on the coolant tank. Run engine at idle with cap off and top up when required. Brief revving to circulate coolant. Before it gets to 80c, put the cap back on. Then rev at 2.5k to warm up to 90c. Then at 90c rev at 2.5k for 5 minutes and every 30seconds rev to 5k.

Going really well and had Mrs SiC come out wondering what all the noise was. I asked her to check the coolant level on the tank. Her response?

You know there is steam coming out?


Oh fiddle sticks, that will be the coolant tank then. 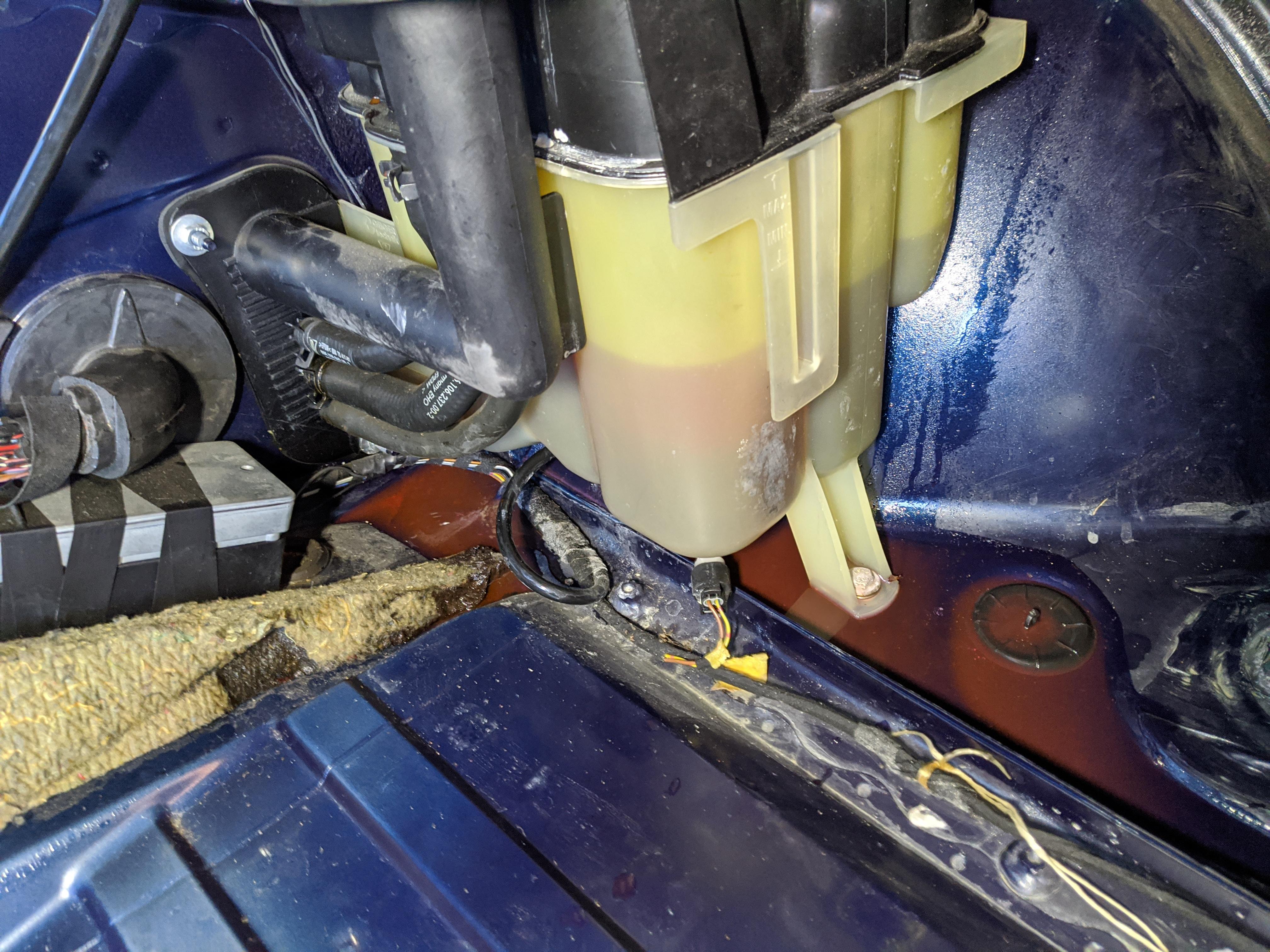 You need a simple car, something like a MGB?
Top

So I went to burp the cooling system last night. Bit fearful of doing it considering I've heard it's a pain job. Followed the Porsche workshop procedure closely as I could. Ended up topping around 12 litres or so into it.

One oddity I had was the rear hub without a wheel attached was spinning when the car was in neutral. This caused me some confusion as it was the other side of the car and I could see the Speedo on the dash registering a speed. Must be the transmission oil moving around that is effectively working on the gears as a pump. Pulling the handbrake stopped it. Never noticed this before on other cars I've worked on. 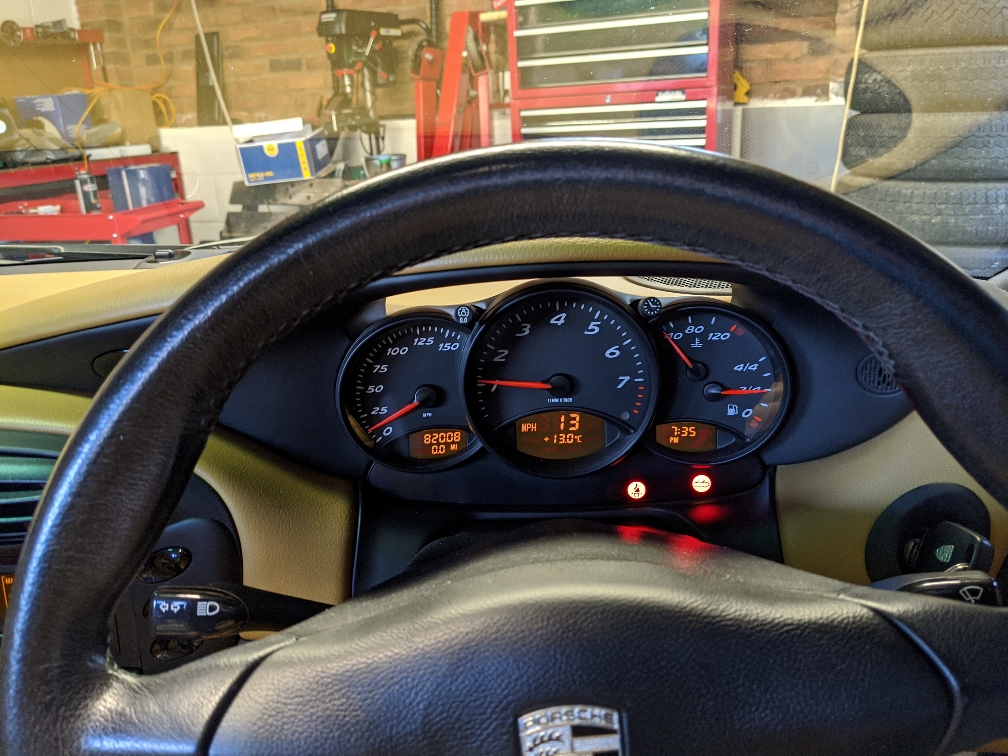 Now as I was heating up the system to bleed it, I had Mrs SiC come out to see what all the engine noise was about. She alerted me to the fact it was boiling itself in the rear.

This meant only one thing. Coolant tank leak. 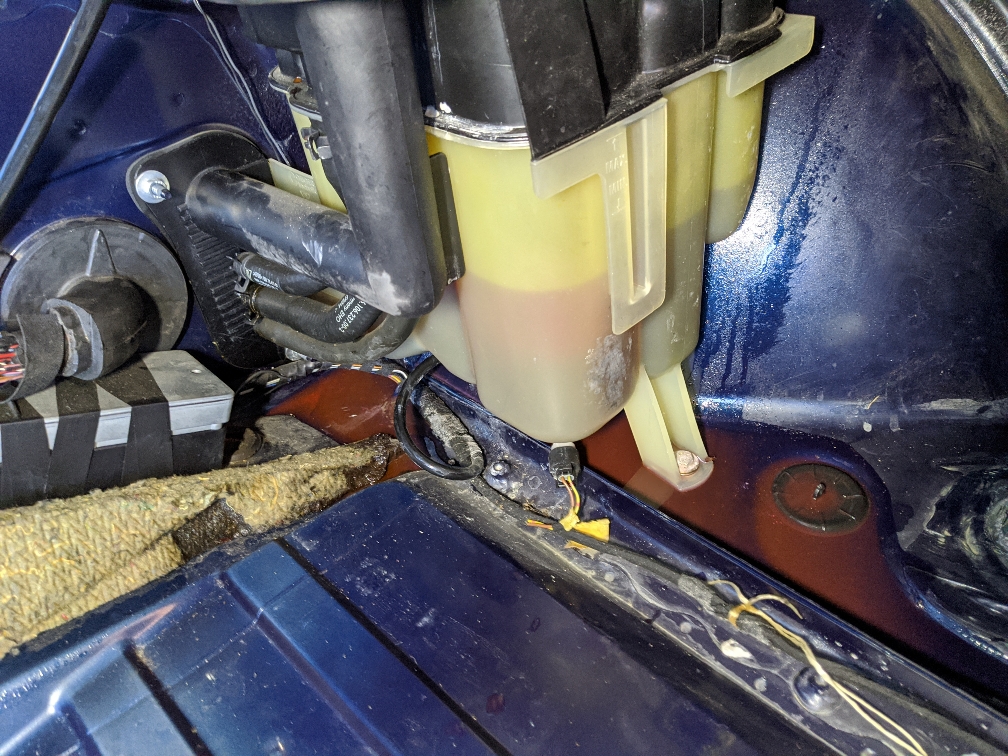 As I mentioned earlier in this thread, I always suspected it was the tank or the cap. However when the radiators started leaking badly, I hoped it was just that. I'd previously bought the tank before I bought the rads, so I had the part to hand. Except I didn't want to fit it as it's a notorious job to do on the Boxster.

Anyhow this incident meant I had to change it. I did consider possibly I could outsource this job but it's one of those things you just have to get on with. Don't think about what could go wrong, just do it.

The biggest problem with the tank is accessibility of the hose clamps. They're all inside the engine bay and with stuff in the way. The guides online show using an expensive hose clamp tool and going in from underneath. I don't have massive hands but there was absolutely no way I could get in there.

I tried removing the loom bung and going in that way. 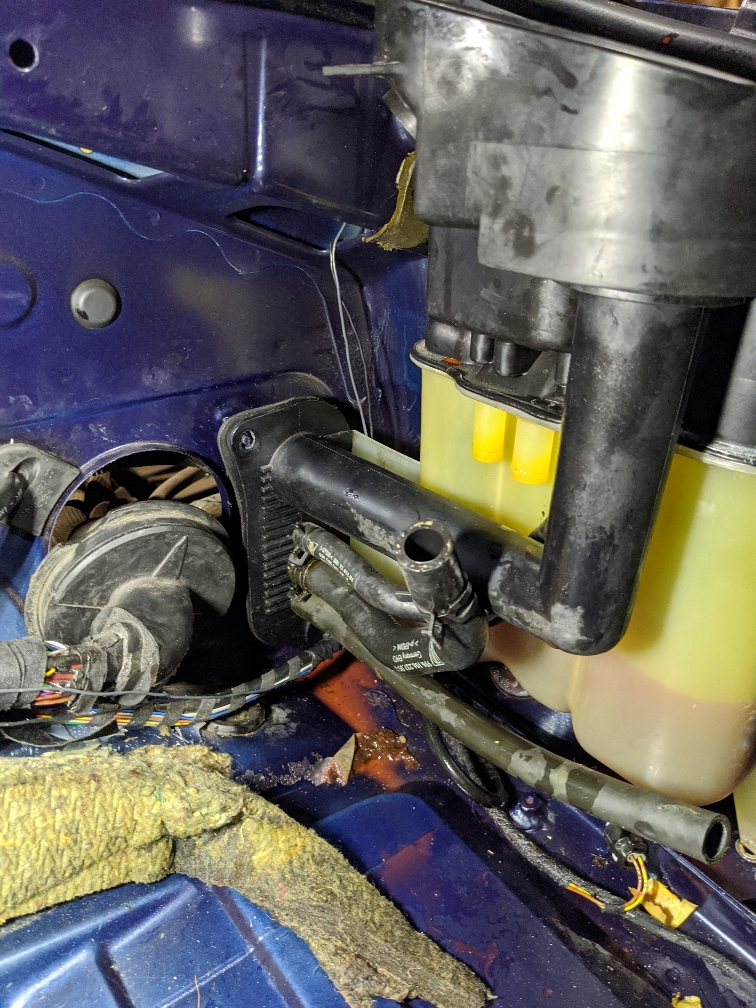 I could see them but still not enough room. Then removed the oil fill pipe to give me more visibility. 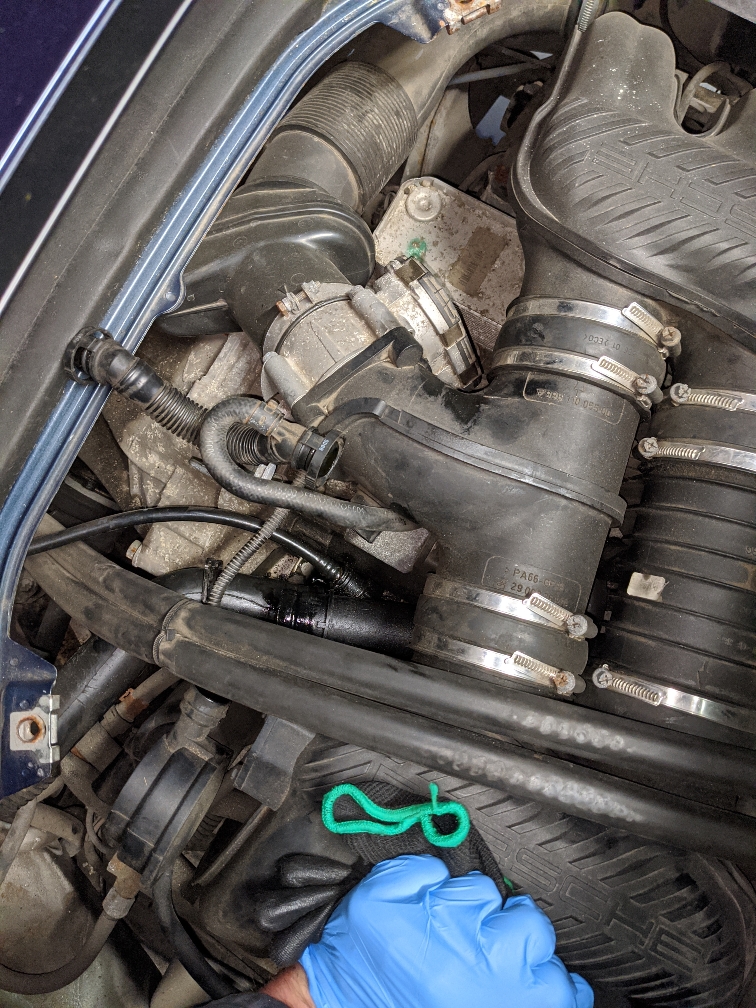 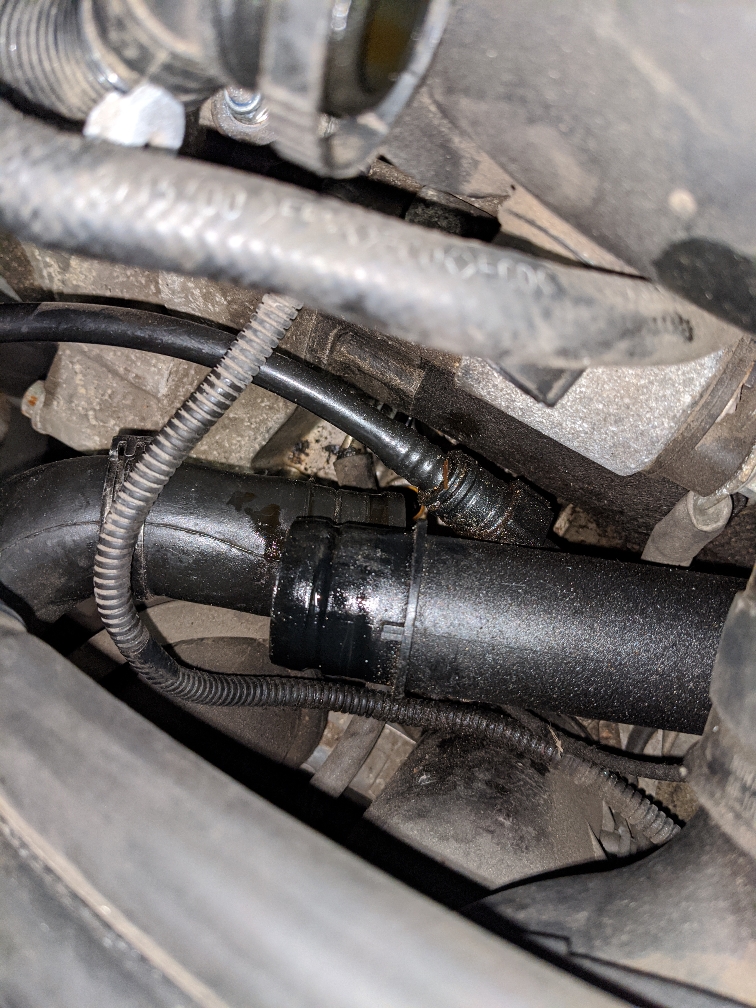 Notice it had a split in it. Possibly what caused my slightly lumpy idle? 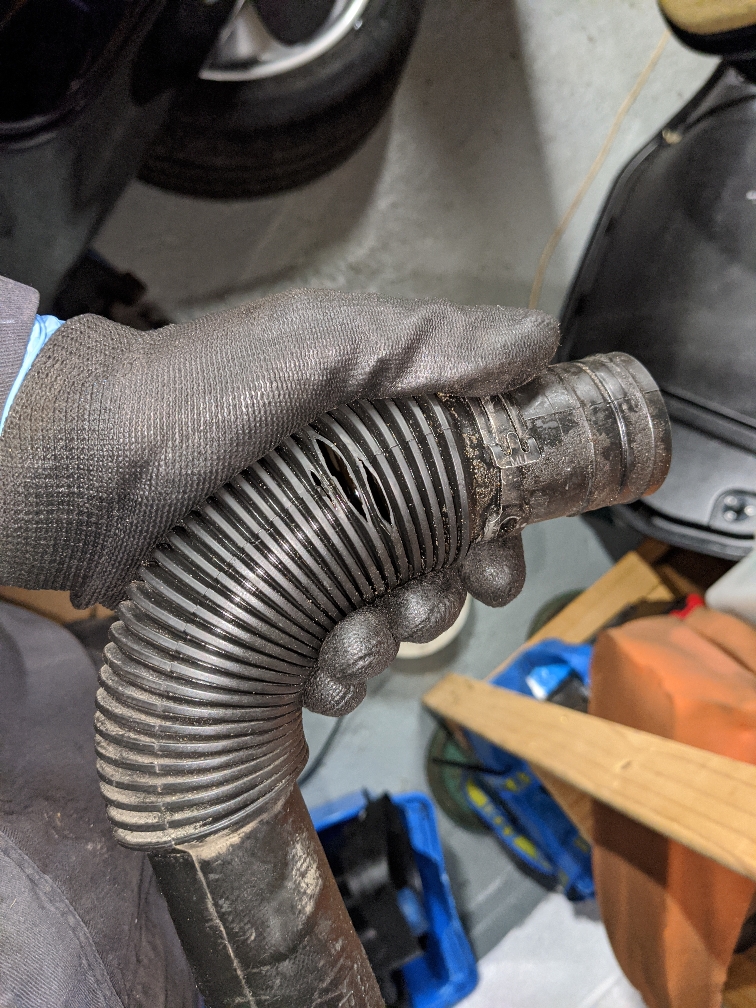 Did a professional* repair and left it to dry. 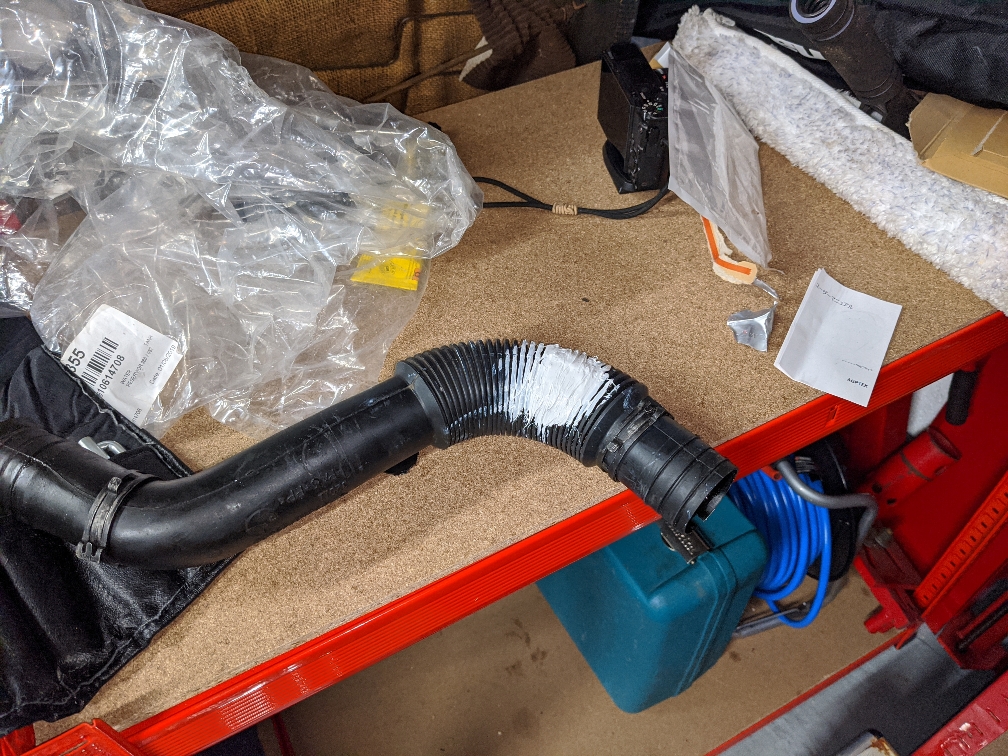 Side note, I found this box. Apparently it's a battery backed tracker. Easy to forget that these cars used to be worth quite a lot of money! 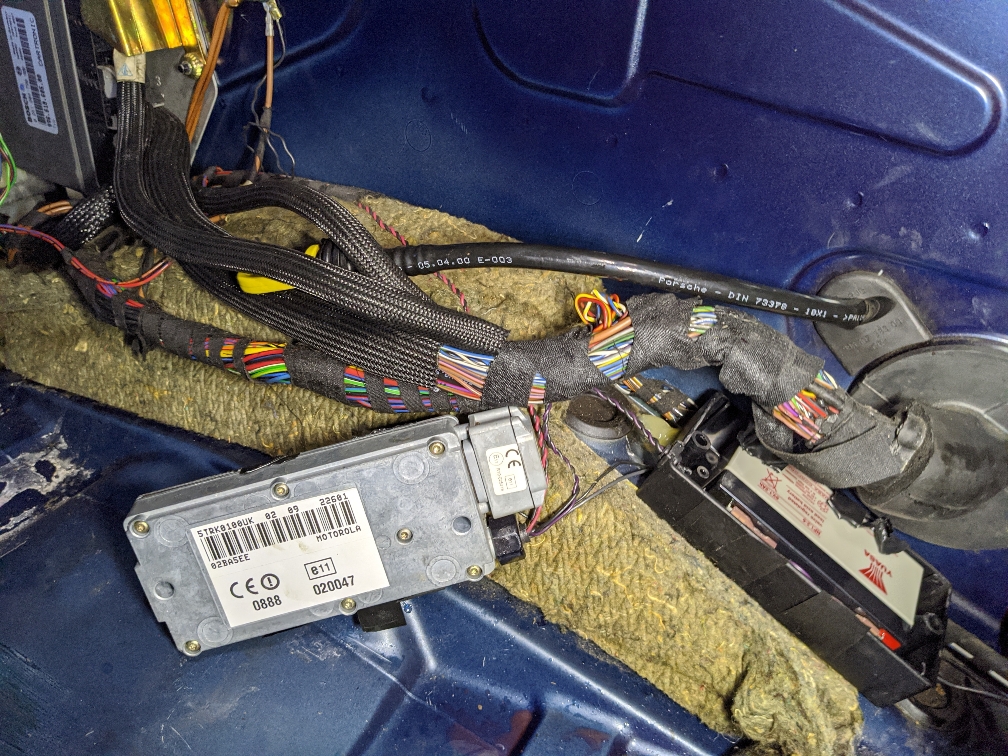 Anyhow one of the problems is despite undoing the bolts to the tank, you can't pull it forward. The pipes are straight with short run on the other side and these go to hard lines. Looking at the hard lines, there was two clamps to the body. The runs were quite short and went to rubber hoses with a fair amount of movement in. So I thought what about undoing these clamps.

Turned out it was a master stroke. This allowed me to pull the tank out. 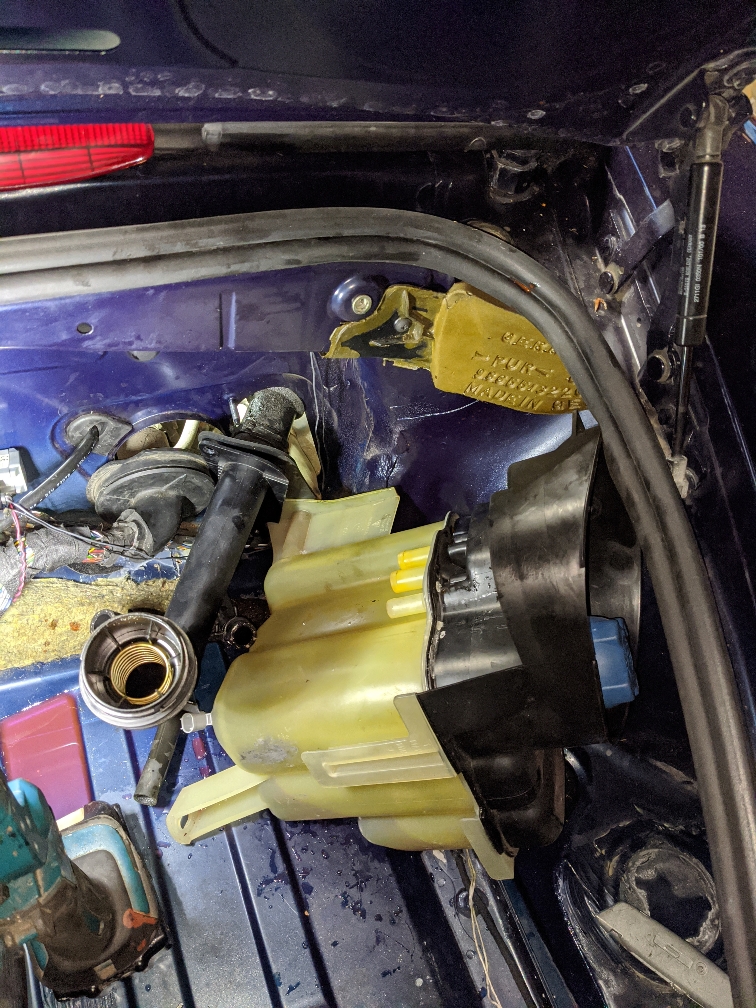 Enough to get to this clamp by twisting the tank. The only fitting on the actual tank that needed to be removed from the engine bay. 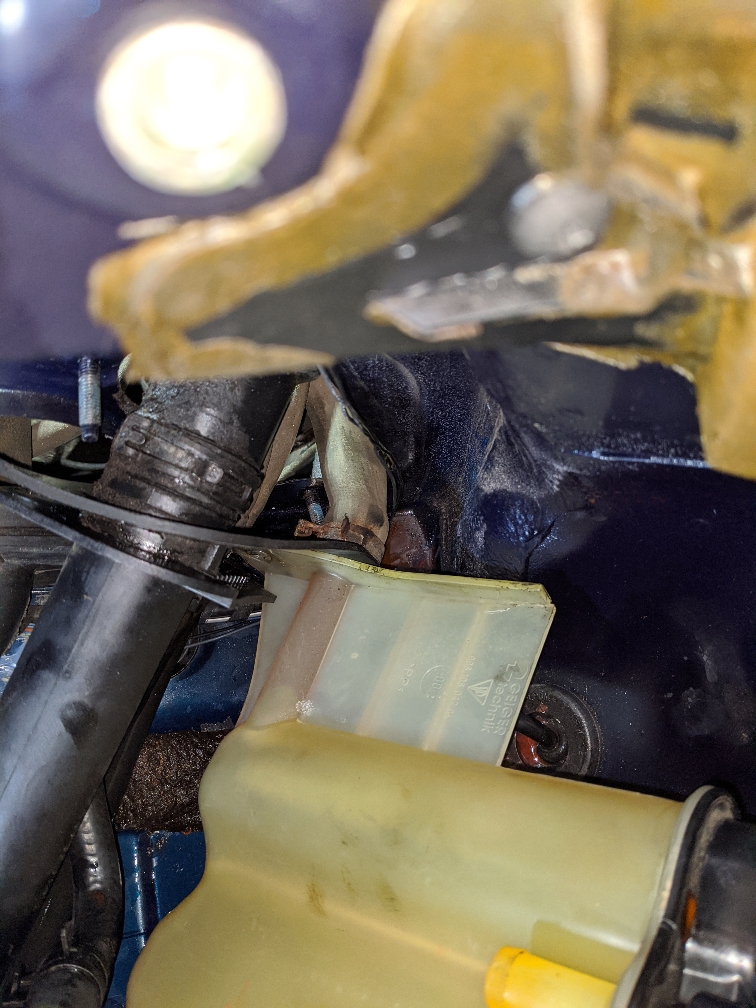 Surprised no one had thought of this idea before. Maybe I'll find out later when trying to put all the hard pipes back into place.

Undoing that clamp allowed me to remove the tank. 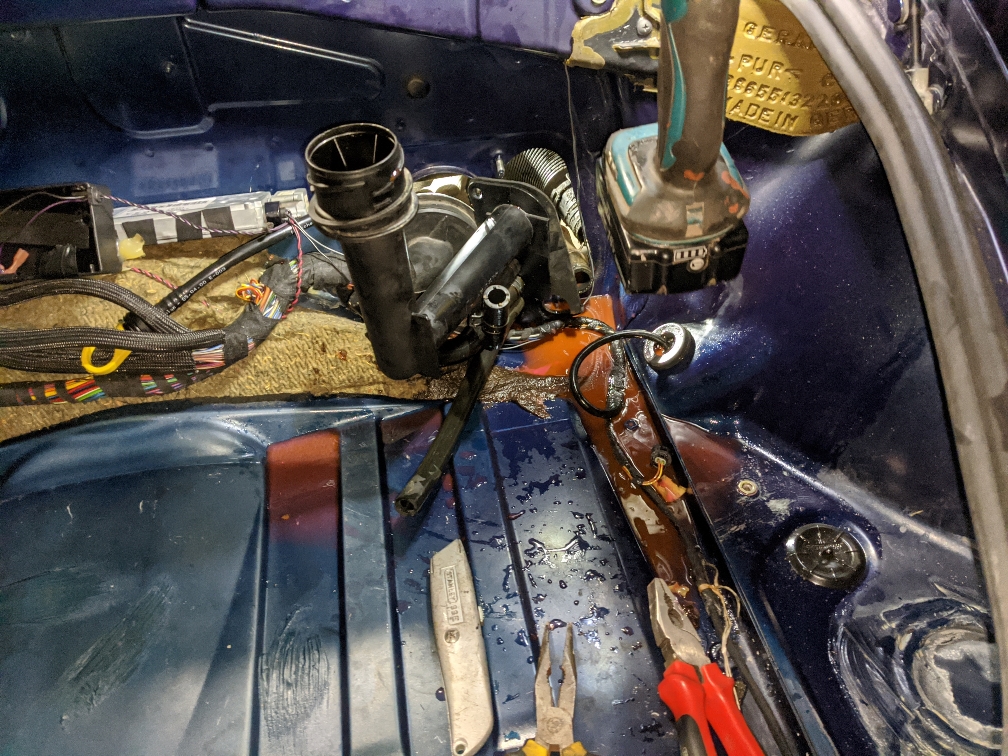 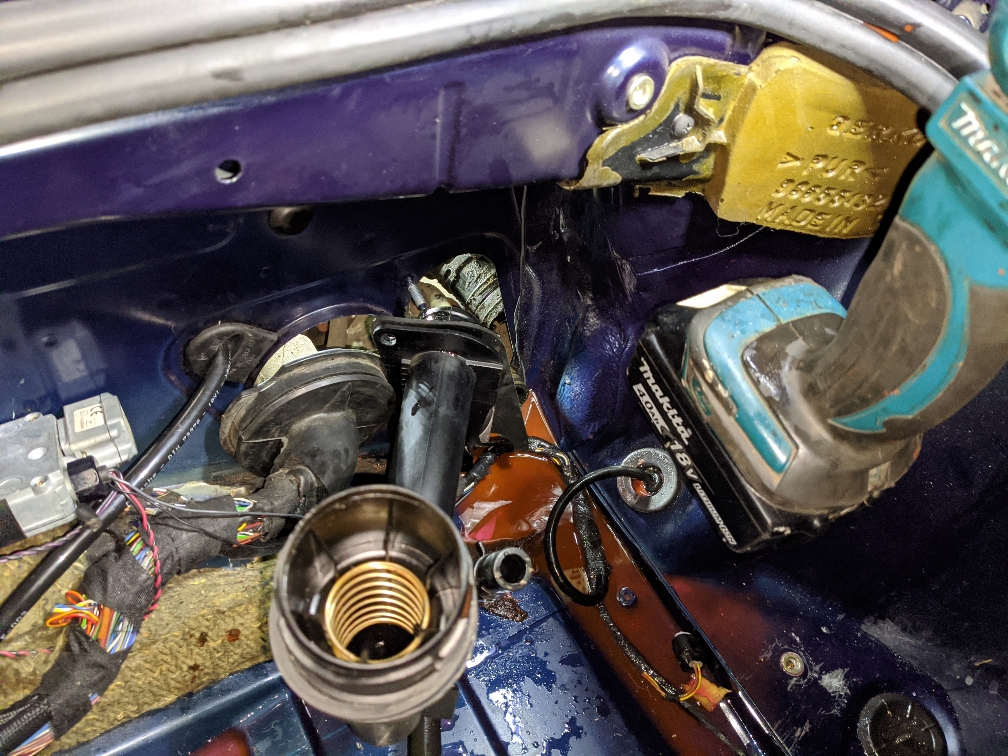 Left the tank to drain. 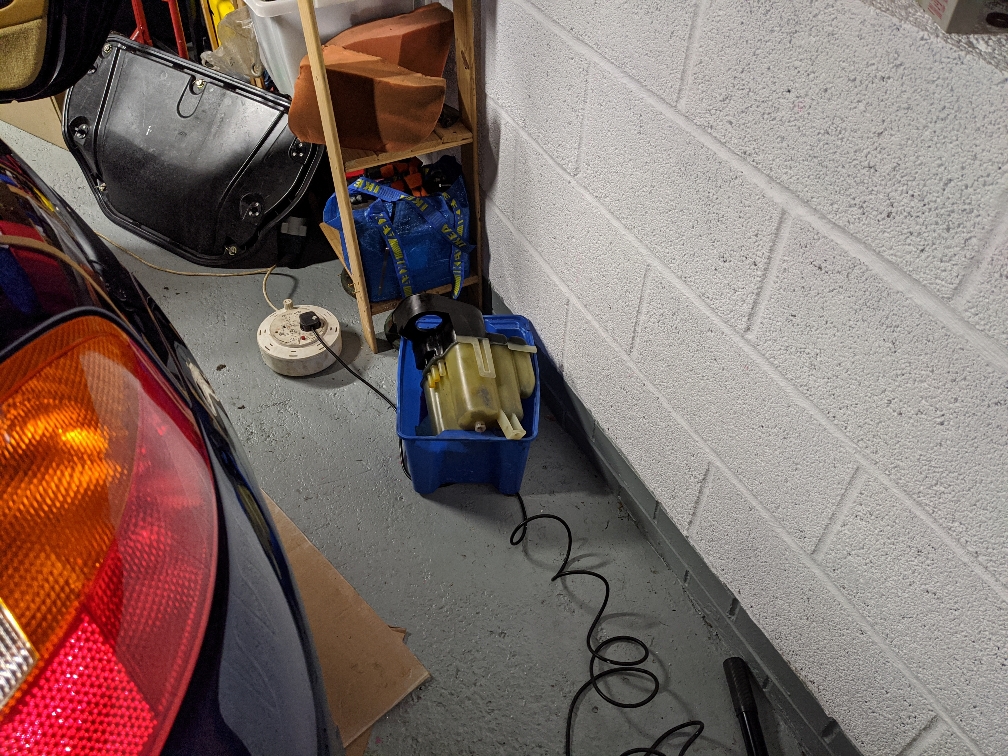 It was clear why and where the tank was leaking. 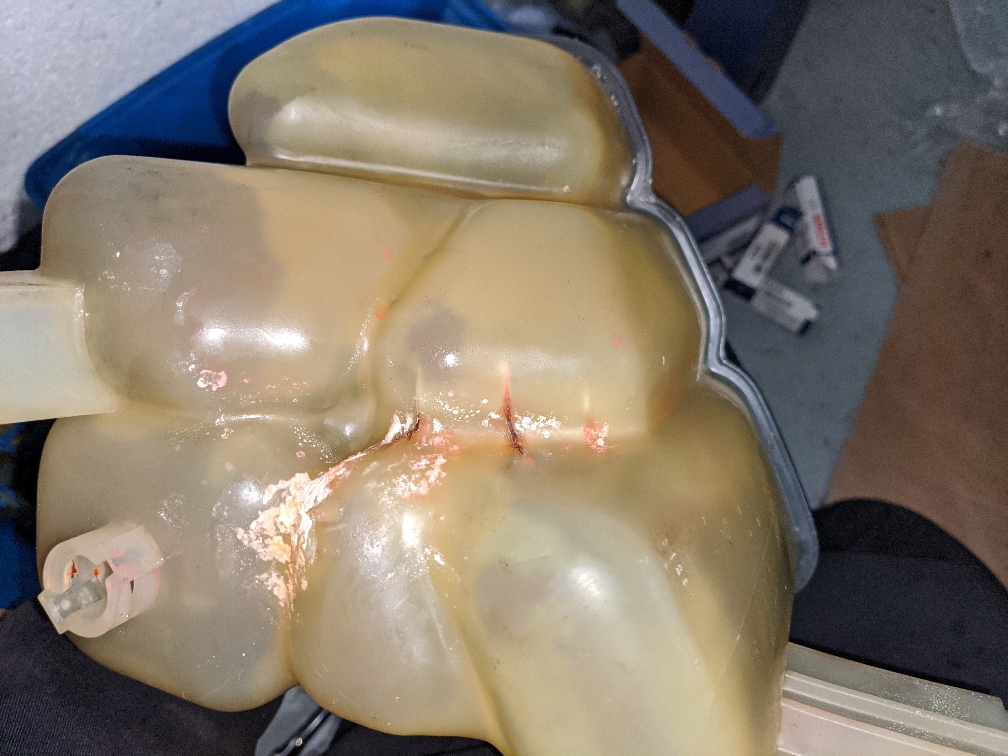 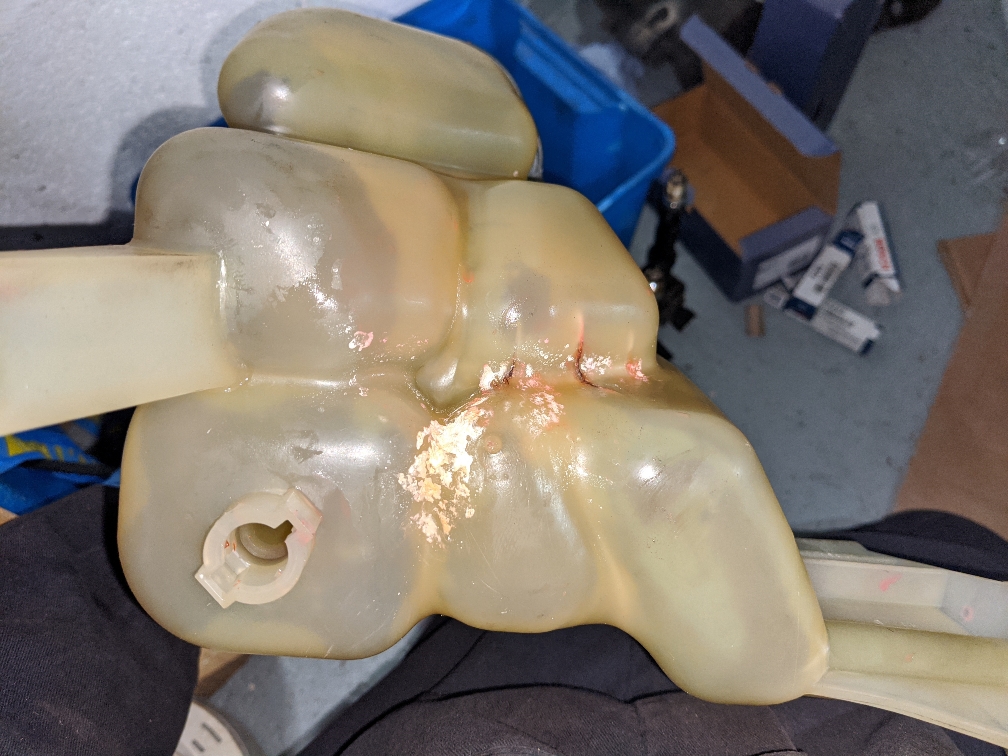 New tank went in the same way. Pro tip I found out recently is silicon spray. Applying this on the pipes makes it super easy to then push the pipes in. 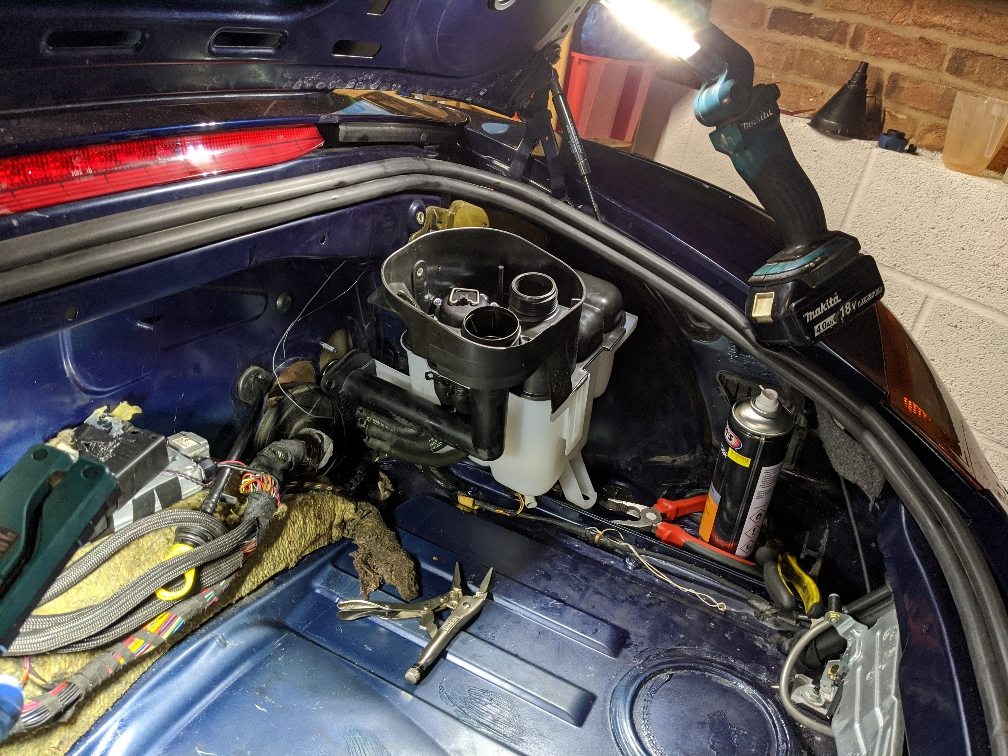 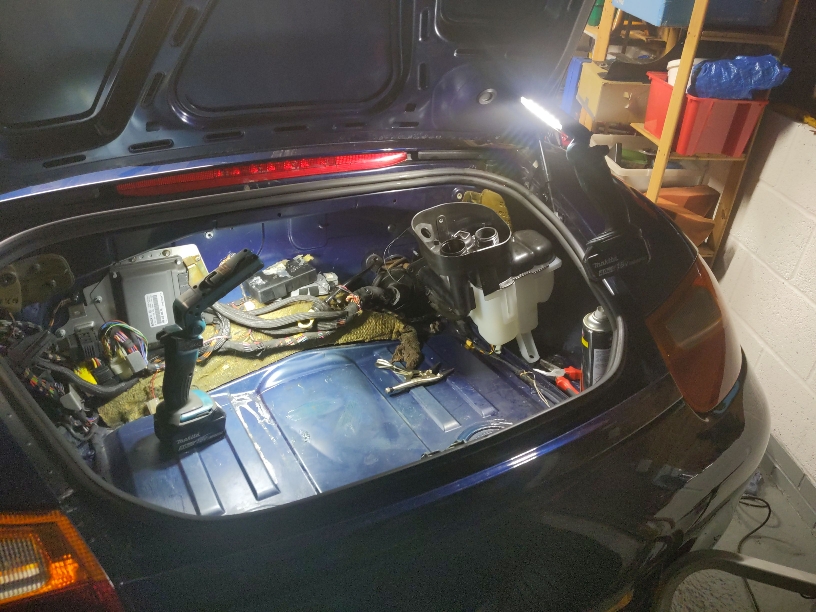 Just waiting for the oil fill pipe repair to dry, then I'll finish it off tonight and refill the system again. However the worst of the job is done now. The rest of the evening was spent replacing the other bank of plugs and coils.
Top

That looks a bloody awful job to do! Do they start with the tank & build the car around it?

As to the wheels turning, I'd agree on transmission oil or similar. It's common on bikes, but I think it's due to the oil in the wet clutches on them.
Self-appointed Internet God
Top

I genuinely don't know how they fitted in the factory. I can't see how they had access to the tank clamps when everything was fitted.
Top

Most (if not all) cars I have had running while jacked up have spun one or the other wheel slowly, sometimes both!

As a complete counterpoint to the epic levels of complexity above, I just washed the car. I found it taxing though straightforward

I've been awake since 1:30 am so full of vim, vigor and viagra... I'll come down with a crash later!

Viagra is to keep my pecker stiff, it props my trousers up under the wasteband and removes the need for a belt

Stuff we've got to look forward to when we get old!
Top
Post Reply
2393 posts